Be the first to review

Daimler Limousine Hire was incorporated in 1987 with only one classic Daimler. From these modest beginnings, we have grown substantially and now have some 15 vehicles ranging from a vintage Daimler Limousine used in the Coronation procession of King George VI, to a Daimler Empress whose first owner was a Royal Princess. We also have a fine selection of modern Daimler Limousines and Landaulets.

In the mid 1930's, the Daimler Company decided that a new Limousine was needed to bridge the gap between their enormously expensive 8 cylinder Limousines and the cheaper alternatives being produced by other Companies. Thus the first "Stretch Limousine" was born, by extending the chassis of the 20HP saloon, installing a larger engine, and fitting it with Limousine Coachwork by a variety of Coachbuilders. The new car was very successful, being much in demand by Municipal Authorities and large Companies. Our Limousine, originally a Mayoral Carriage, has been extensively rebuilt, and is now finished in French Navy over Cream, with new grey leather upholstery. It will seat up to 5 in the rear compartment, or, if a Bridal Limousine, give ample room for the largest of Wedding Dresses together with easy and elegant access. We recommend either our French Navy or Cream DS420 Limousines as accompanying cars where necessary.

The Daimler DK400 Limousine was introduced in 1955, 93 being produced by 1959 when production ceased. Of these, 86 received the standard Limousine body, and 7 were sent to Hooper, the Royal Coachbuilders, to be fitted with "Empress" style bodies. They cost over twice as much as the standard Limousine, around Â£6500, over Â£200,000 using todayâ€™s values ! Our Limousine was initially supplied to the Royal Mews, and was the personal car of Princess Marina, the mother of Princess Alexandra. We have extensively restored the Empress to the fine condition it now enjoys, painted in French Navy and Cream. The large rear saloon is upholstered in grey cloth with walnut fittings. The windows are deep giving a perfect view of the beautiful Bride within. We recommend either our French Navy or Cream DS420 Limousines as accompanying cars where necessary.

We have the largest selection of vintage and classic wedding cars in the area. All cars are displayed in our showroom.

There are currently no reviews for this company

All fields are required. Your review will appear immediately.

Thank you for submitting your review.
There was a problem submitting your review. Please try again later.
Incorrect password. Please try again.
You cannot review your own business
Reviews are limited to one per user and you have reviewed this business before.
The email address you have entered is already registered. If you have forgotten your password use the 'Forgotten your password?' link to reset it. 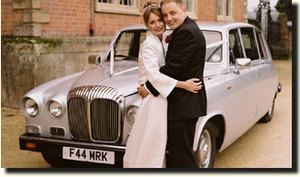 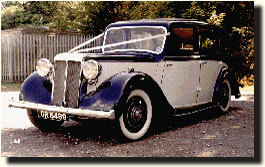 We offer these payment methods

Up Up Away Balloons